You are here: Home / All posts tagged loughborough
29 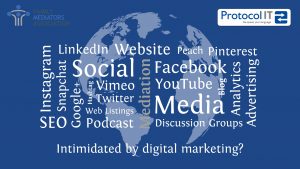 Last month, the Office of National Statistics released the latest bulletin on Internet access by households and individuals. It shows that during 2016 the internet was used daily or almost daily by 82% of adults (41.8 million) in Great Britain, compared with 78% (39.3 million) in 2015 and 35% (16.2 million) in 2006. In addition 70% of adults accessed the internet ‘on the go’ using a mobile phone or smartphone.  The communications regulator Ofcom publishes annual statistics for the UK, the latest (2014) showing that the proportion of online adults using social networking sites rose to 72%. So why are so few family mediation services using it?

In keeping with the Family Mediators Association (FMA) annual conference theme of Shakespeare, the workshop is titled ‘Give me your hands and we’ll be friends” playing on the line from ‘A midsummer night’s dream’. Its goal is to explore the latest and greatest social media and digital marketing tools that are available, and hopefully inspire some delegates to embrace rather than fear it for their mediation services. It is targeted at those who have had a little dabble or no exposure to social media, and will provide a couple of key reasons why family mediation services should be using social media.

As a practical demonstration of what can be achieved with social media, we’ve created a video for YouTube two months prior to the conference. This has then been linked on a number of the social media platforms as a practical experiment. How successful will it be? Come along to the workshop to find out! You can watch the promotional video for the workshop here.