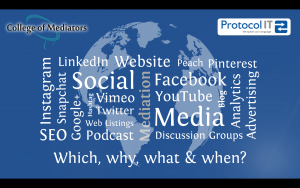 Social media has become a trend over the past few years – everyone says you need to jump on board to survive – but as a mediator, is it a relevant marketing tool for your service?

The Office of National Statistics releases bulletins each year on Internet access by households and individuals. In statistics released on 3rd August 2017, it shows that during 2017 the internet was used daily or almost daily by 80% of adults (41.8 million) in Great Britain, compared with 82% in 2016 (41.8 million), 77% (39.3 million) in 2015 in sharp contrast to 35% (16.2 million) in 2006. In addition 78% of adults accessed the internet ‘on the go’ using a mobile phone or smartphone compared with 75% in the previous year.  The communications regulator Ofcom publishes annual statistics for the UK, the latest (2016/7) showing that the proportion of online adults using social networking sites decreased to 61% compared with 72% in 2014. This has been replaced with activities including general surfing, emailing and online shopping. Online entertainment being one of the most powerful drivers of online media, with mobile devices seeing a huge growth with mobile display advertising reaching more than 51% of all internet advertising. We’ll also be revealing the most important device for accessing the internet – has the tablet has it’s day? 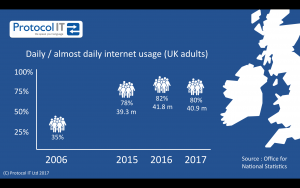 Next week we’re running a workshop at the College of Mediators Community Mediation Conference #CoMCommunity at Loughborough University. Its goal is to explore the latest and greatest social media and digital marketing tools that are available, and hopefully inspire some delegates to embrace rather than fear it for their mediation services. It is targeted at those who have had a little dabble or no exposure to social media and online marketing, and will provide a couple of key reasons why mediation services should be engaging with these platforms. The latest statistics from both the Office of National Statistics and Ofcom illustrate the increase in the UK population’s internet connectivity, frequency and duration spent connected.

As a practical demonstration of what can be achieved with social media, we created a couple of videos on YouTube prior to the conference. This has then been linked on a number of the social media platforms as a practical experiment. How successful will it be? Come along to the workshop to find out! You can watch the promotional video for the workshop here.

We’re running a social media review on one of the community mediation services who will be attending the conference, to see how they are currently doing, and what they could do to improve… Should be interesting!

In the past two years he has helped organise and run Family Mediation Week (2016/17). and was on the UK Mediation Awareness Week 2016 working group using various digital media and social media streams.